If you read this blog regularly, you probably know I am on a quest to find the perfect gluten free chicken nugget.  Little A is obsessed with what he calls "nuggies" and momma is definitely not obsessed with feeding him the fast food ones.  The recipe for these was found on wholenewmom.com and is a great, simple recipe for chicken nuggets. 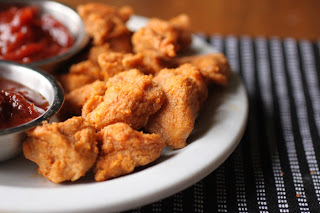 I made these following the recipe exactly (but omitting the cayenne since they were intended for a little guys taste buds.)  They turned out really well and received the "Little A Seal of Approval!"  Having made them once now though I have a few changes planned for next time.

1. Increase the black pepper a bit to account for the lack of cayenne so they have a bit more flavor.

2. Decrease the coconut oil to 1/8c instead of 1/4 because they were a bit oily for my taste.

Other than these few minor changes these were great.  So good in fact that Little A believed they were from the "Chicken Nugget Store," otherwise known as the place we go when momma is too tired to cook and the bane of many a mother's existence the golden arches!  I figure, any recipe that my son believes is from McD without me actually having to go there is a winner!!